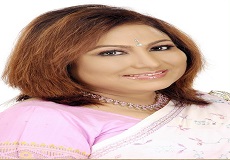 Mitali Chaudhary
Born and brought up in Guwahati, Assam, India Mitali Chaudhry started her singing carrier at the age of six. Mitali learnt to sing to the accompaniment of the Harmonium and Tanpura at the age of six. Her first playback for a film was at the young age of ten. A trained classical singer she has done M.Mus in Hindustani Classical Music.\nShe is a high graded artist of All India Radio and Doordarshan.\nBased in Mumbai, Mitali has made a presence in Bollywoods Hindi music Arena by singing in Films, Music Videos, Albums and T.V. Serials. Mitalis sweet voice, her style of singing, versatility and her ability to sing in very high pitch (scale) have attracted many music directors in Bollywood. She has sung in number of Hindi Films. She has also lent her voice in a number of Assamese films besides other languages such as Bengali, Bhojpuri, Rajasthani, Gujarati, Punjabi etc.\nMitali has done her first Hindi album \"Tohfa\" with music India (Universal). She has also done albums under prestigious music companies like Venus, Tips, HMV, Sa Re Ga Ma, Times Music, Bombino etc. A few of her albums are released Worldwide by International music companies in Canada, London and The Netherlands.\nMitali has a great number of songs to her credit in Hindi T.V. Serials including the prestigious mega serial Ramanand Sagars \"Ramayana\", \"Krishna\" & Akbar Khans\"Akbar The Great\" under the legendary music director Naushadji. Besides performing all over the country on stage, Mitali has performed on live stage shows in foreign countries like USA, UK, Canada, West Indies, The Netherlands, Carribean Islands, Dubai, Singapore etc. She has also performed in the prestigious Wembly Areana (stadium), London with Mumbai Cine Stars in front of a packed crowd.